Earlier this month Toni and Gina travelled to Christchurch to participate at the Youth Collaborative Hui and catch up with old friends, while making new friends along the way.

As we listened deeply to the experiences of the various people we met, we came to know in much greater depth what life is like five years on after the quakes. Jason Pemberton is co-founder of the Student Volunteer Army, a voluntary rapid-response organisation that assembled after the 2011 earthquake. Speaking to him during our visit, he explained to us that usually after a natural disaster there is the initial crisis intervention, rapid response and then things tend to plateau out. What he was seeing in Christchurch was things would nearly get to point of plateauing and another earthquake would happen (referencing the quake earlier this year in February). Jason told us that this often resulted in people having to start over time and time again, and that while tiring for those involved, invited a plethora of new approaches and a downright get stuff done attitude.

This get stuff done attitude was something present in much of our kōrero with a diverse group of people, we have so much admiration for this roll-up-your-sleeves approach seen in all the differing sectors in Christchurch.

“Christchurch is the perfect place to be in many ways, you could be working on absolutely anything at all, and it is going to be no less ridiculous about what has already happened here. You could never have imagined the things that were going to happen through the earthquakes, and yet we’ve all been through them. There’s no escaping it and so that in a strange way is liberating.” Jason Pemberton

You can listen to some of Jason’s reflections five years on from the big quake in this video below.

Tiny Interventions is a school-based initiative run through the Canterbury DHB offering evidence-informed therapeutic interventions to help young people (and educators) with the hardships experienced through the quakes. Michelle, the project lead, told us about multiple instances when young people’s ability to engage in education had been disrupted by the earthquakes. We heard from Tiny Interventions that they had been applying a variety of techniques and tools to support young people in schools. The team coach students, teachers and parents in stress reduction techniques, mindfulness and the five ways to wellbeing to help alleviate some of the stress caused by the earthquakes’ follow-on effects.

We were reminded by Kelly at MHAPS, a local Mental Health Advocacy and Peer Support service, of the continued resilience demonstrated by people living in Christchurch and the importance of mental health services like MHAPS to support people in sharing experiences through peer relationships. 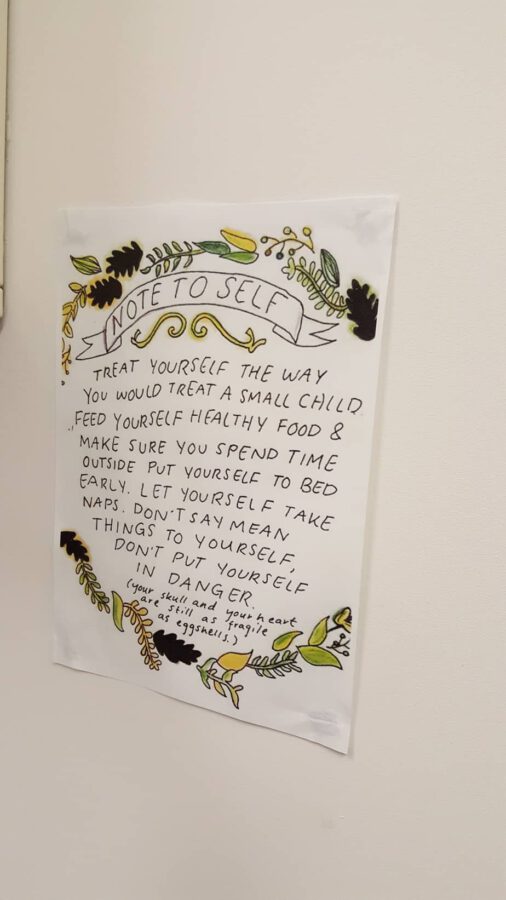 One of the kind notes on the wall at MHAPS

We were also lucky enough to catch up with members of the Lifehack community. We spent some time with Jess — who is an inaugural Flourishing Fellow, came to the Nelson Weekend Event and presented at Tahatū Rangi alongside Gina and Flourishing Fellow, Samuel. 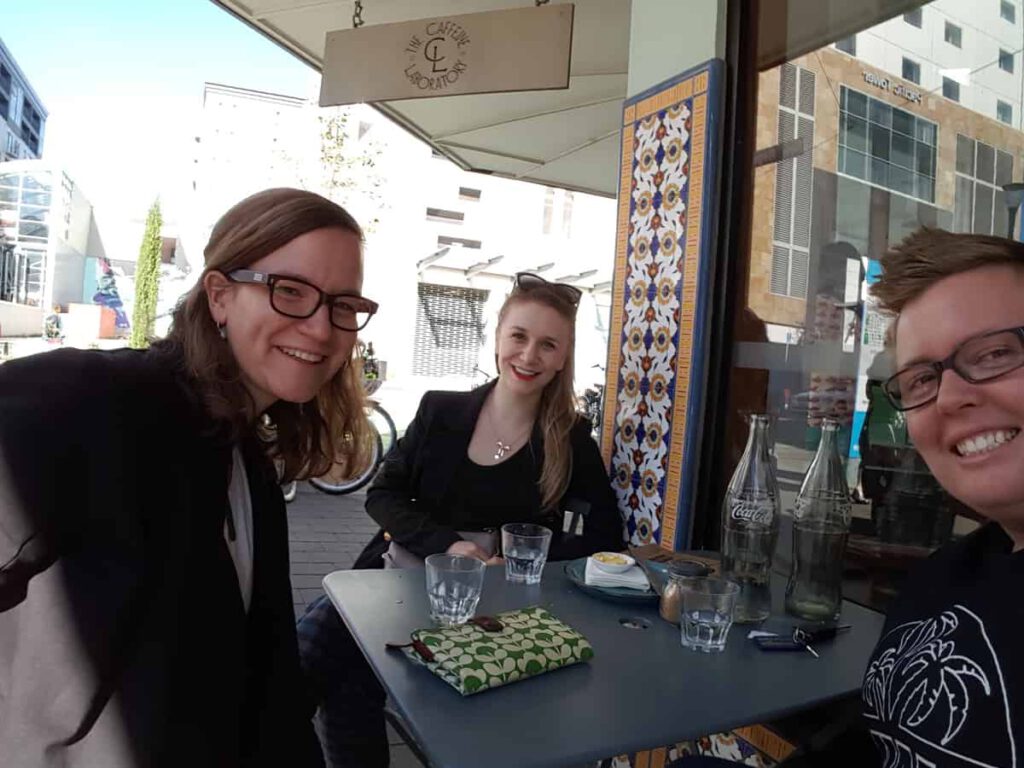 Jess, what have you been up to since the Fellowship?
Since the Fellowship I have gone back into my role working for the DHB. I have been excited to apply my learnings from the Fellowship to my day-to-day role, specifically facilitation skills and the principles of collective impact. The Fellowship has also helped me to develop the skills and confidence to seek new and exciting opportunities to gain experience and knowledge where I wouldn’t have looked before.

What has been happening in Christchurch recently, what’s coming up that you’re excited about?
I’m excited about the new places popping up all over the city and new cafes opening every week. I am looking forward to the joys of autumn; walking through the fallen leaves in Hagley park.

On Wednesday afternoon we were joined at C1 Espresso by Chloe Waretini who, as well as being a Enspiral contributor, is part of a bunch of amazing initiatives in Christchurch. Chloe told us of the work that she has been doing in creating sustainable food distribution networks in Christchurch and explained that the Christchurch City Council has made funding available to community groups like Ōtākaro Orchard to establish community gardens amongst other things on the Ōtākaro (Avon river) bank.

The purpose of the Ōtākaro Orchard is to provide produce for a cafe which will shortly be built. It’s an opportunity for community members to learn new skills and connect with one another — covering all of the five ways to wellbeing to us.

As well as council funding, Ōtākaro Orchard auctioned on TradeMe a lettuce the Prime Minister planted. They are currently running a Givealittle campaign to raise funds for the next phase of the project. 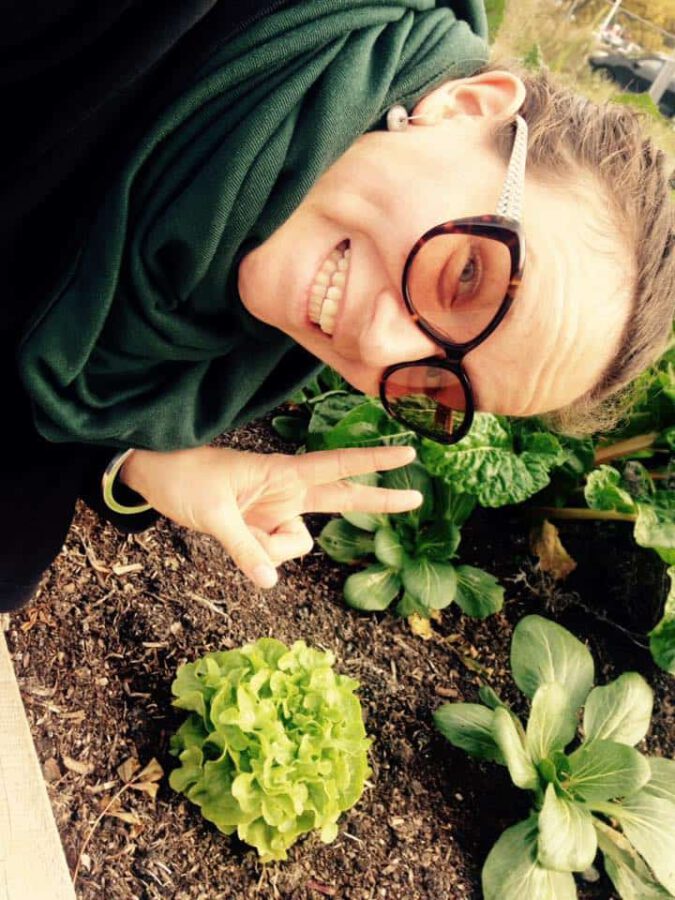 We would like to extend our warmest thanks and gratitude to the following people: Michelle at Tiny Interventions, Hannah Dunlop at Environment Canterbury and Canterbury Youth Workers Collective, Chloe Waretini, Kelly at MHAPS, our Flourishing Fellow Jessica Wise, the Ministry of Awesome crew, the Collaborative Trust Hui team and Jason Pemberton for their hospitality and openness.