Earlier this year we set off on a project with Sovereign Insurance and Youthline Manukau. The idea was to augment the existing community partnership between the two organisations, while synchronously improving the wellbeing of young people through support services offered to them.

For Youthline, it was about utilising the Sovereign team’s demonstrable business acumen for the purpose of co-creating systems and processes to increase volunteer recruitment and retention.  The Sovereign team picked up new skills in the areas of design and social entrepreneurship, which were readily applied in the Lifehack facilitated events.

We had a blast working with Youthline and Sovereign. We learnt three key lessons from this collaboration:

If you’d like to find out more about what we did, here’s a handy report as well as a video that summarises the main event.

Six months down the track we checked back in with both organisations to ask some questions about how it’s been since. Making a splash and having a good time during an event is always fun—but the proof is in the ripple, or the day-to-day changes in the longer term.

Youthline Manukau had four active volunteers back in March. They now have 26 – that’s eleven solo counsellors and 15 trainees (people who are on the path to becoming solo counsellors). According to the Youthline team, the local centre also took over their own volunteer orientation, with tremendous feedback. 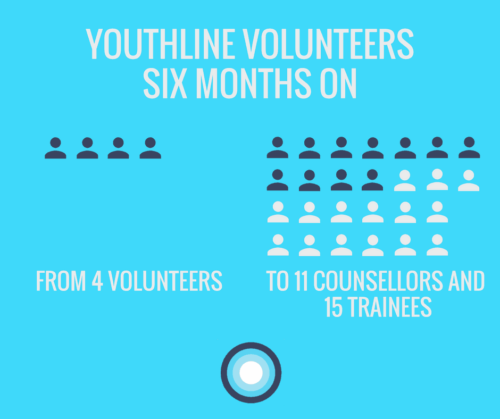 On the Sovereign side, we saw some great uptake in entrepreneurial and community tools. Two thirds of participants said that they’d since embedded prototyping and user interviews into work and/or life.

Answering the question how they would you describe any lasting changes in themselves, or describing how they might approach your work or personal life differently as a result of this, participants said:

“I now understand that one of the best ways of volunteering is giving my skills – for me, that’s when real value happens!”

“Sometimes I wait until everything is absolutely perfect before completing anything. This experience has helped me realise that this is not sustainable and the best way to move forward is to simple place a stake in the ground to establish first of all where you are and this way you can start planning what you need to do in order to get to where you want to go – one step at a time.”

“I now understand that one of the best ways of volunteering is giving my skills – for me, that’s when real value happens!”

“Better of understanding of the value I bring to my personal and work community. Individuals can make a difference, no matter how small.”

Describing the changes participant staff noticed in their fellow workers, one of them described that they ‘have really stood up and become noticeable and leaders in their current roles.’ Ka pai! On top of that, all of them described an increased social connection between the people who participant from Sovereign, with one person stating that ‘they’ve become my confidantes and help me work through challenges I’m facing.

Despite hailing from different sectors, one participant described the common threads: ‘Although there are obvious differences between a corporate company and a volunteer organization, a lot of the issues and solutions can be applied to both organizations!’

Best of all: 100% of participating staff said they are now more inclined to volunteer, if they aren’t doing so already. And as we know,  volunteering, or giving (time, energy, skills) , is part of the Five Ways to Wellbeing—bonus!