Designing a programme for impact is an ever-evolving art. This post shares some of the key programme design features from our flagship programme, the Flourishing Fellowship.

In 2017 we hosted our third iteration of the Flourishing Fellowship. Some aspects of the programme have remained constant, such as the venues, and having three hui spread over three months. Apart from that, we’ve experimented with a range of content, target audiences and frameworks.

If you’re running educational programmes, or involved in systems change work, we hope this post provokes some new ideas to help you design impactful programmes.

Feature # 1: Diversity of actors within a system, not just a general diversity of humans

Our target audience for the Fellowship has shifted in subtle ways in the last three years. For the first Fellowship, we wanted to bring together a diverse group of people. We were heavily influenced by the Social Labs approach, which is all about bringing together socially diverse groups of people to experiment with new approaches to solving complex problems.

We succeeded in creating a diverse cohort for that first Fellowship. But some of them struggled to apply what they were learning as they didn’t have a testing ground.

Our work in developing the Lifehack Impact Model helped us to realise that missing piece. Our Impact Model was based upon the COM-B behaviour model. To create behaviour change (B), you need to ensure people have the Capacity (C), Opportunity (O) and Motivation (M) to make that change.

Over time, we came to realise that the people best poised to make change were those who already had the Opportunity to integrate these learnings. For some of the inaugural Fellowship, they lacked the Opportunity to apply their increased Capacity and Motivation.

During 2016 our programme design was also informed by the concept of ‘spheres of influence’. We knew that each Fellow had a sphere of influence and we wanted to give them an opportunity to leverage those relationships to create change. In order to do this, we needed to narrow our audience further for the third Fellowship.

That’s why we limited our audience for the third Fellowship to people who were already “working with or for young people”. Unlike the first and second Fellowship, everybody on the third Fellowship was already playing a part in the youth wellbeing system. We then looked to create diversity within that tighter constraint.

Diversity for diversity’s sake can only take us so far. Youth wellbeing is a complex challenge and a person’s ability to make change can often depend on who they know and what role they play in a particular system. The image below from the Waitemata Whānau Wellbeing group (based on the socio-ecological model) helped us conceptualise this learning. 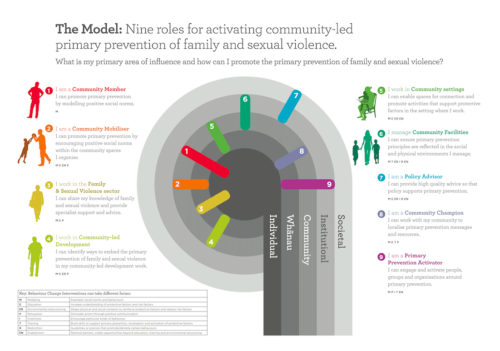 We had the luxury for the third Fellowship of having a much better understanding of which content was accessible and relevant for people based on the two previous programmes. We had experimented with a smorgasbord of different methods, tools, processes and approaches in the first and second Fellowship.

We also had an opportunity to improve the Fellows’ experience. In the first two Fellowships, people were leaving each event excited and buzzing with ideas. But they were also exhausted and overwhelmed. Some people bounced back from that to apply the knowledge and tools. Others struggled and were forced to take more time off work to recover.

We were fortunate to receive a provocation from Kaye Maree Dunn, one of our tuakana. Try including less content – she said – with more time for people to process that content. 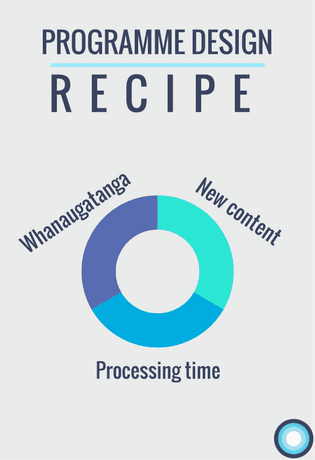 We included silent time near the end of each hui for people to process their learnings in the way that suited them. Writing, drawing, sitting and thinking, meditating, going for a walk outside. 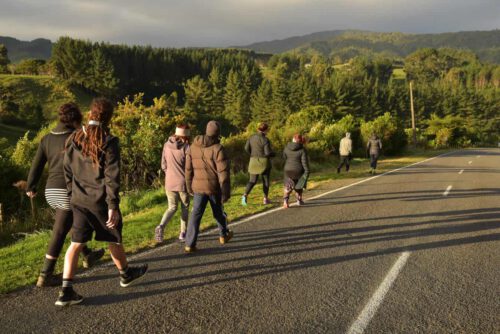 And the third hui was solely about processing the content we had already introduced. We didn’t introduce any new tools or methods at that hui, but instead gave Fellows the chance to wrap everything together.

In 2017, we reframed how we enabled ako (reo for mutual learning) in the programme. In the previous two cohorts, we had invited each fellow to host a 20 minute “Ako Session” with the rest of the cohort. In 2017, we incorporated mutual learning into every session in more subtle ways.  There were few large group discussions. Most of the sessions involved small groups or pairs to give Fellows more chances to contribute and learn from each other. The Fellows shared knowledge, skills and experiences with the other Fellows, who were encouraged to actively listen. This gave the Fellows the opportunity to learn content beyond that introduced by the facilitators.

One of our experiments in 2017 was to have less content, and to try link the pieces together more concretely.

Here’s an example. In one session we introduced the Social Lean Canvas and user interviewing as a way to validate assumptions. We used the interview template from that session for Fellows to practically consider how they might enable participation in co-design. Previously these were five different sessions, rather than two integrated sessions.

And the results? In the check-out circles, many Fellows said they were leaving feeling re-energised and re-motivated, rather than overwhelmed and exhausted. Once we analyse our evaluation results, we’ll be able to further validate the success of this experiment.

Feature # 3: A programme that is “within its place”

How do you place an intervention within its location and culture?

At Lifehack, we’ve always tried to develop bi-cultural programmes and work with collaborators with a deep knowledge of Te Ao Māori. The building and integration of Te Ao Māori has been deliberate and part of our ongoing learning.

For the most part, our team have been a bunch of pakeha attempting to apply te ao Māori principles as respectfully as possible. To one up our commitment, we invited Carolyn Taueki-Stott and Dougal Stott to co-lead the third Fellowship with us.

Almost half of this year’s applicants identified as Māori. With this year’s team being two tauiwi (non Māori) we jumped at the chance to bring Carolyn and Dougal on board as co-facilitators.

This year, we opened the Fellowship with a mihi whakatau and closed with a poroporoaki, worked with the Fellows to create our own tikanga, and used everyday practices such as karakia and waiata to honour and recognise people’s whakapapa and culture.

Allowing everybody to participate through te ao Māori principles

What we’ve found is that te ao Māori principles enable all people to participate in a meaningful way. A strong tikanga improves the experiences for everybody, not just people who identify as Māori.

In the future, we would look to prep people more about the role of te ao Māori principles in the programme, to ensure people felt comfortable with what ever knowledge they brought with them in that area.

We enjoyed acting as translators for each other. Dougal or Carolyn might explain a concept using te reo Māori, and Toni and I could then re-phrase that into our tauiwi language. Manaakitanga become hosting. Accessibility became about enhancing mana. And so on.

Feature # 4: Fold in your existing community

Part of the Fellowship’s unique value proposition was that it sat within a broader eco-system of programmes and people. This benefited the participants. And it made our job easier as programme designers.

Throughout the first and second Fellowships, we had built a supportive community who were keen to link back in with the Fellowship kaupapa.

In both the second and third  Fellowship, we set up a process for people to nominate friends, whānau, and colleagues who might benefit from the Fellowship. Our Māori tuakana felt this might enable rangatahi and other people to be put forward who would really benefit and bring a lot, but who might not nominate themselves.

To incentivise even more nominations for the third Fellowship, we ran a competition to see who could nominate the most applicants. This resulted in more applicants who were appropriate for the programme and who already knew a little about what to expect. Around 50% of the Fellows were people who had been nominated.

The nomination process also benefited the people making the nominations. They could stay in touch and meaningfully contribute to the programme. And they could deliberately select potential allies in their community to bring them on board with the Lifehack kaupapa.

This process of folding back into the kaupapa  and sustaining the network was most evident up in Kaitaia. Jamie was part of Lifehack Labs back in 2014 and the Flourishing Fellowship in 2015. She nominated Carolyn and Dougal for the 2016 Fellowship, who in turn nominated Rowena, Richard and Hinemoa for this Fellowship.

Another example of folding people back into the kaupapa was during the third hui in 2017, we invited manhiri (guests or visitors) to participate in a World-Cafe styled event which we called The Ideas Exchange. The 2017 Fellows were able to test their ideas with small groups of manuhiri, seek feedback and find links with existing work across the country.

With more time, we would love to experiment with opening up further opportunities for the Lifehack community to explore the possibilities of collaborating and learning from each other.

We decided to link each of the 2017 Fellows with one of the previous Fellows in a tuakana (mentoring) relationship. These catch-ups gave the Fellows an opportunity to mitigate some of their fears or uncertainties about the programme. They could ask somebody who had been there, done that, got the t-shirt.

It also gave them something to talk about when they arrived at the first hui. Arriving at any new event is scary. It’s nice to have something common to grasp onto and chat about.

Folding in their workplaces

If we were running the Fellowship again, we would do more to fold in the participants’ workplaces. However, there’s a fine balance between enforcing an intervention for everybody and pushing people to extend their comfort zone. We’ve seen with previous Fellowships that some content lands for some people and not for others. So we would need to invite them to bring their workplaces on board, and not force them into a particular prototype or exercise.

The programme design features that we’ve touched on today have come from four years of experimenting with different approaches. And we’re continuing to learn more about what works, when and who it might work with.

Our 2017 Fellowship Impact Report will soon be released over on our resources page – or it might already have been released by the time you’re reading this post.

If you’re interested in learning more about progamme design for impact, we suggest checking out our resources page for more ideas!