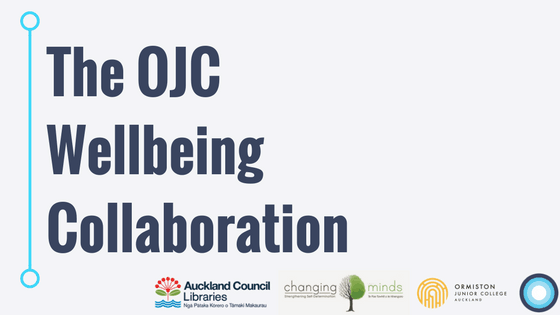 This blog post shares the highlights of this youth-centred, cross-disciplinary, cross-sector project.

In 2015 during Design for Social Innovation (DSI), the Lifehack team met Kat Lui-Asouma, the Learning Leader at Ormiston Junior College. We started having a kōrero around how we might mashup wellbeing and design within a school context, in the newly formed Auckland suburb of Ormiston. 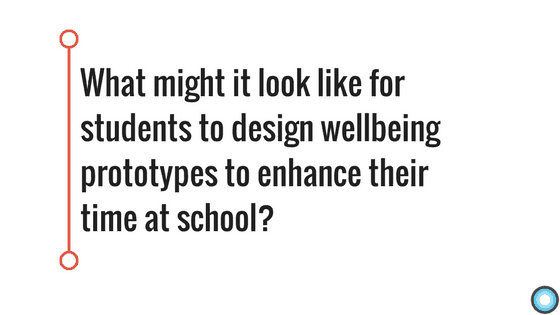 What might it look like for students to design wellbeing prototypes to enhance their time at school?

In early 2017, Lifehack and Changing Minds prototyped a wellbeing workshop with the OJC teaching team to explore what the teachers thought wellbeing means at school. We dropped in some systems-mapping exercises and introduced wellbeing plans as a tool the teachers could introduce for themselves and their learners.

This session gave us an understanding of what’s on top for teachers in a new school. Getting systems set up and running. Understanding the needs of learners with a view to encouraging [youth-led] initiatives that enhance  protective factors within the school environment.

In March, Changing Minds and Lifehack were joined by Auckland Libraries to host a wellbeing design challenge as part of the school’s term two Authentic Inquiry Project curriculum.

AIP is a student-led investigation into a particular topic, very similar to a design process (like the Everyday Design Challenge hosted with Massey University in 2015). AIP runs for five sessions a week, for nine weeks. At the end of the term, the learners host an expo to share their prototypes with friends, whānau and members of the local community.

Learners had a choice of four AIP streams, there were 55 learners who selected the Wellbeing + Arts stream: “Inside out: Small things make a big impact”.

The learners were invited to consider how they might make small changes to improve the wellbeing of young people in Ormiston. 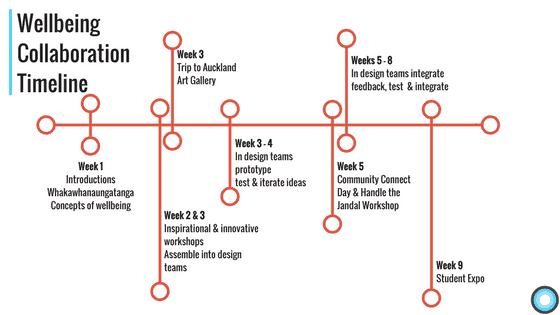 During weeks one through four, we (Changing Minds, Auckland Libraries and Lifehack) co-taught across multiple sessions alongside OJC teachers to explore the role of wellbeing at an individual level, within the school, and the greater community and environment.

From week one, learners began to form their own ideas and to develop a line of inquiry they wanted to pursue. The image below highlights the key activities across the term. 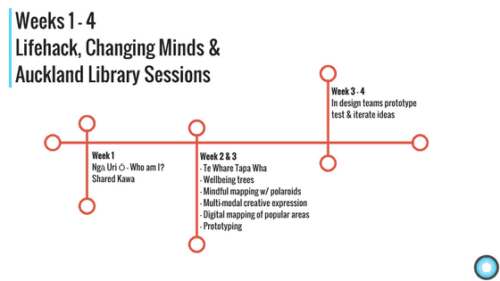 Sessions during weeks one through four

We hosted a space at the intersection of creativity, wellbeing and identity – we wanted learners to begin to see themselves as agents of change, and to understand that wellbeing can take many different forms.

Through the superb facilitation skills of Monica, Amber and Rata (all ex Toi Ora) learners became engaged in a variety of creative processes. Writing, drawing, slam poetry, dance and photography all became vehicles to explore the concept of wellbeing. 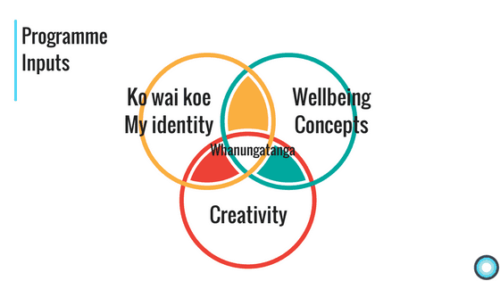 We used Ngā Uri Ō in our programme design. As you can see in the diagram above, a significant amount of time is focussed on activities that build whanaungatanga while exploring the questions of: koe wai au (who am I?); ko wai koe (who are you); and ko wai tatau (who are we together). In essence, we wanted to create relationships between the delivery team, the learners and wider community – as well as between the learners themselves. After all, it was only the second term of a school that only opened in term one!

Learners, teachers and guests said that, hands down, the Community Connect Day on May 31st (Week 5) was one of the key learning experiences. We invited 25 people from the community (including representatives from health and social services and the local board) to the school to participate in a World Cafe styled event. Students shared their prototypes (freshly out of a conceptual stage) and guests provided feedforward (a positive take on “feedback”).

“Community and whānau events are often one-way passive experiences where community and family get ushered through a process and talked at. This event was framed as a two-way participatory experience where everyone could get involved and build the conversation” – Alexanda Whitcombe, Healthy Families Manukau, Manurewa-Papakura.

The Expo was the second opportunity for members of the community to experience the learners’ prototypes. Most learners were in groups of 2-4, working in groups across years 7 – 10 and there were twenty two prototypes on display during the expo.  Throughout the day guests were able to engage with the students’ ideas which included: a spoken word piece denouncing bullying; contemporary dance that explored the role of diversity in wellbeing; watercolour painting as a method for creative expression; and a video to induct new students into school life at OJC, just to name a few.

We will be releasing a couple more blog posts outlining the programme learnings and linking in in-class resources over the next month. The final report outlining the impact of this collaboration will be published in October