I’m back, this time with a little Pep Talk, courtesy of Kid President…

Right, so, in the wise words of Kid President – “Create something that will make the world awesome”.

Want to be that person? The one that makes the world awesome? Yup, me too. That’s why I got involved in LIFEHACK, because I’ve run events before where we’ve brought together people from a wide variety of backgrounds and skill sets, and in the space between order and chaos, awesomeness has occurred.

I wanted to help more people have that feeling… that moment when you look around the other members of your team (who you only met the day before) and realise that not only have you co-created an awesome idea, but damn it, you’ve gone and made it happen too. If you’ve never felt that feeling, do yourself a favour and sign up for LIFEHACK today: https://lifehackhq.co/#join

Want to be involved with an extra spoonful of awesome? Well come join our volunteer team which will be pulling the Wellington event together over the next 3.5 weeks… 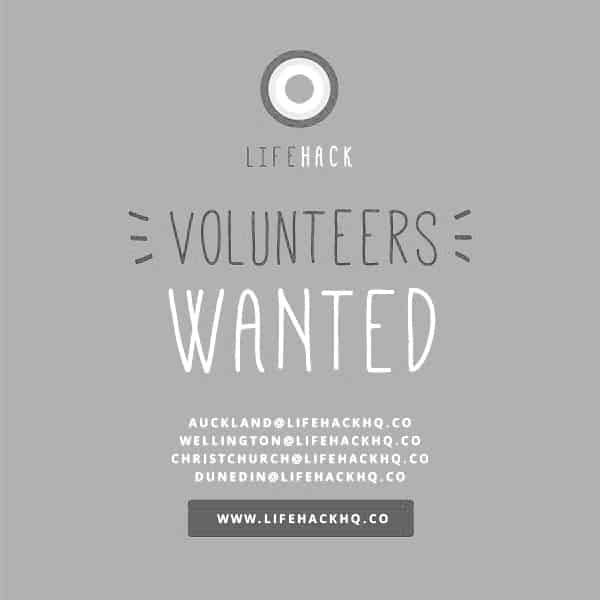 We are looking for:

Chief of Happiness and Project Logistics – mainly you’ll be on the project logistics (chasing people and things down to make the last few pieces fall into place for a great experience for everyone), but we’d also love to sneak you in to help on the weekend with making sure everyone is happy. What a cool role, right?! Just make sure people are happy! Ideally, you are: Organised, Smiley, a Good Communicator, Make Lists For Fun – around 4-5 hours per week.

Comms Helper Monkey – we’ve got an ace team in Auckland who’re handling most of the Communications and PR to let people around the country know about Lifehack, but there’s nothing like a little local knowledge & contacts – we’d like a hustler to make some calls, draft up some press releases and generally get the word out there. We’d also love you to help run some social media stuff during the weekend if that’s your thing. Ideally, you are: a little media savvy, a natural with social networks, and willing to get on the phone to chat to some editors of local press & magazines to get the word out – around 4-5 hours per week.

That’s about it for now, but if you think you have some skills to bring to the party before the weekend, I’d love to hear from you on the above address (or if you know me – gimme a call!). If you think you know someone that should be involved – send them this link!